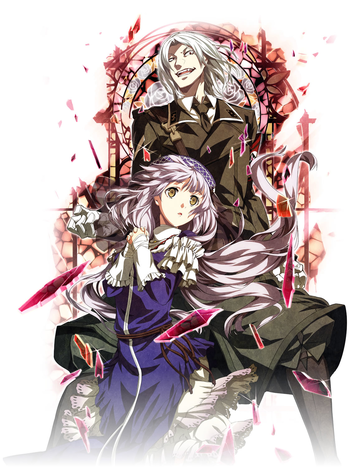 I fain would ask her: oh, why trembles all my soul? Has bitter wrong, a sinful deed been done?
I gaze and see but you, feel but you
For only I know you, who perished by my love.
Wither to ashes, O my love.
Advertisement:

A spinoff visual novel by Light written by Takashi Masada which follows one of the antagonists from the original Dies Irae, Wilhelm Ehrenburg.

Before the events of the original novel, Wilhelm is visited by the woman Dinah Malloy at the local bar he frequents and is asked for an interview. Wilhelm being in a good mood obliges and begins the recount the history of his youth as well as one important event in his life after he joined the Longinus Dreizehn Orden, the moment when he meet a young woman and against all sense and reason managed to fall in love.

The story then jumps to 1944 during the Warsaw Uprising during which Wilhelm ends up inadvertently save a young hospital nun named Claudia Jerusalem, and albino just like himself. Instead of killing her, he decides to take her with him as he is summoned by Reinhard and given orders to set out on a new mission, this time to Katyn Forest, in order to deal with some kind of distortion. There he would met yet another architect of his destiny, Ludwig van Rosenkranz.

Originally released in 2016, it was eventually translated into English and released worldwide on Steam in 2019.

No matter how different our circumstances, we are all heading for the same destination.
You wish to arrive in a better place - your sanctuary. Correct?