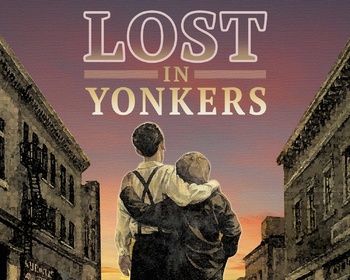 Lost in Yonkers is a Tony Award-winning 1991 play by Neil Simon.

The story is set in 1942, and the action follows Jay and Arty Kurnitz, brothers aged 15 and 13 respectively. Their father Eddie is a recent widower, his wife Evelyn having died three months earlier after a battle with cancer. If that weren't bad enough, Eddie ran up $9000 in debts in 1942 money to pay his wife's medical bills, and he's in debt to a loan shark.

Needing to make money and make it quick, Eddie comes up with a plan to be a traveling salesman selling scrap iron to the military, the war having created a sudden demand. He needs to find a place for the kids to stay, so he leaves them with his mother in Yonkers. Grandma Kurnitz is a mean, vicious old lady. In fact, she initially refuses to take Jay and Arty in, only relenting when the boys' Aunt Bella insists that they stay or she will leave. Aunt Bella is a 35-year-old woman who is very flighty and seems to have some sort of minor learning disability and cognitive impairment; she is relentlessly browbeaten and emotionally abused by her mother. Aunt Bella's quest for independence is a major theme. The situation is further disturbed by the sudden appearance of Uncle Louie, a jovial fellow who also happens to be a bagman for the mob.

The original play starred Mercedes Ruehl as Aunt Bella, Irene Worth as Grandma, and Kevin Spacey as Louie. In 1993 it was adapted into a film directed by Martha Coolidge, with Neil Simon adapting his own play for the screen. The film featured Ruehl and Worth reprising their roles, with Richard Dreyfuss appearing as Louie and David Strathairn playing Johnny, Bella's boyfriend.