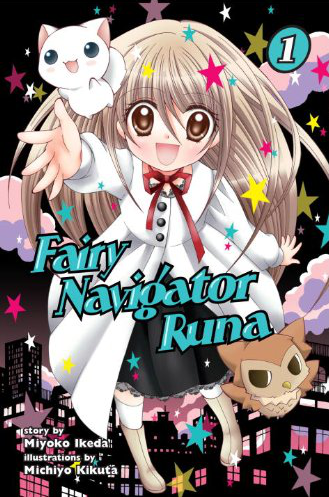 Fairy Navigator Runa is a Shōjo manga based on Japanese novels of the same name, which ran from 2008 to 2010 in the magazine Nakayoshi. The manga is a collaboration between the novels' author, Miyoko Ideka, and artist Michiyo Kakuta. It's published by Del Rey Manga.

Runa Rindo was abandoned shortly after birth and left at a school for foster kids, her only clues to her parents' whereabouts being a mysterious box and pendant. When she reaches fourth grade, she encounters two strangers, Mokke and Suneri, who can turn into animals both normal and chibi-sized. They claim she is the Legendary Child and a fairy princess, and the only one who knows where the Jewel of Everlasting Time is. While skeptical at first, and unwilling to jump at the call, Runa realizes she must act when an evil fairy kidnaps her friends.

While the fairy is defeated and redeemed, Runa realizes that staying at the school would endanger her friends. She sets off with Mokke and Suneri to find the Jewel in the hopes it can grant a wish before falling into evil hands.