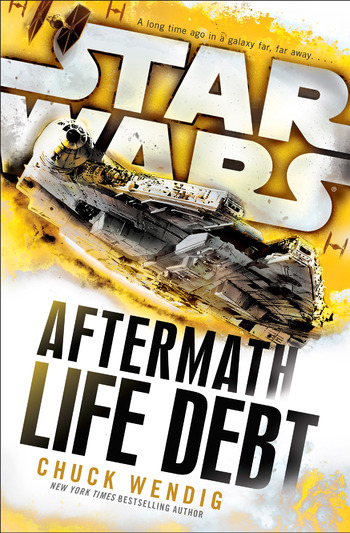 The Emperor is dead, and the remnants of his former Empire are in retreat. As the New Republic fights to restore a lasting peace to the galaxy, some dare to imagine new beginnings and new destinies. For Han Solo, that means settling his last outstanding debt, by helping Chewbacca liberate the Wookiee's homeworld of Kashyyyk.
Advertisement:

Meanwhile, Norra Wexley and her band of Imperial hunters pursue Grand Admiral Rae Sloane and the Empire's remaining leadership across the galaxy. Even as more and more officers are brought to justice, Sloane continues to elude the New Republic, and Norra fears Sloane may be searching for a means to save the crumbling Empire from oblivion. But the hunt for Sloane is cut short when Norra receives an urgent request from Princess Leia Organa. The attempt to liberate Kashyyyk has carried Han Solo, Chewbacca and a band of smugglers into an ambush resulting in Chewie's capture and Han s disappearance.

Breaking away from their official mission and racing toward the "Millennium Falcon"'s last known location, Norra and her crew prepare for any challenge that stands between them and their missing comrades. But they can't anticipate the true depth of the danger that awaits them or the ruthlessness of the enemy drawing them into his crosshairs.

Life Debt is the second novel in the Star Wars Expanded Universe's Aftermath trilogy by Chuck Wendig, taking place a few short months after the Battle of Akiva in Star Wars: Aftermath. Norra Wexley and her band of rebels are busy hunting down high-ranking Imperials with Admiral Rae Sloane at the top of their list. Sloane, increasingly wary of her commanding officer - the mysterious Fleet Admiral - desperately searches for a means to save the crumbling Empire from oblivion. Meanwhile, out in the Unknown Regions and the Outer Rim secret plans are being made and the foundation being laid for the Empire's rebirth as the First Order.

It is followed by Aftermath: Empire's End.