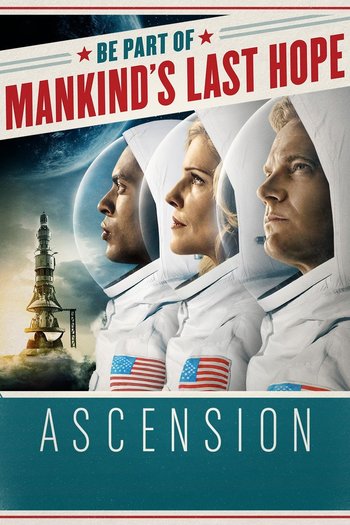 Ascension is a Syfy miniseries about an Orion Drive-powered Colony Ship secretly built by the United States at the height of the Cold War to establish a settlement at Proxima Centauri. The population is generally divided into two classes, the one living at the top of the ship in relative comfort, and the rest who are the ones who make the ship actually function. After 50 years without incident, one of the colonists is found murdered, and tensions begin to rise among the colonists.

Meanwhile, back on Earth, the son of the project's founder is determined to keep the project going.

Ascension was originally broadcast as three consecutive double-episodes, December 15-17, 2014, on Syfy. Canada's CBC played the series as six episodes, airing once weekly, and online streaming services display the series in the six episode format, each named after parts one and two of three distinct "chapters" in the show. Despite decent ratings and some critical attention, the show was not renewed as a full series, like Battlestar Galactica was.

Not to be confused with anything else sharing the name.