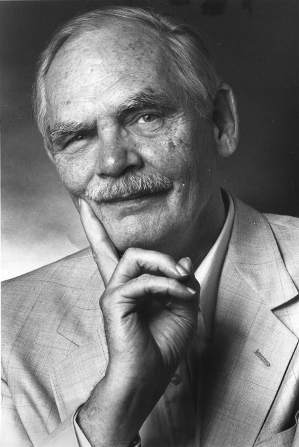 "The future depicted in a good SF story ought to be in fact possible, or at least plausible. That means that the writer should be able to convince the reader (and himself) that the wonders he is describing really can come true... and that gets tricky when you take a good, hard look at the world around you."
Advertisement:

Frederik George Pohl Jr. (November 26, 1919 – September 2, 2013) was an American science fiction writer and editor. His first professional publication was in 1937; his last novel, All the Lives He Led, was published in April 2011. He also started a blog, which earned him the 2010 Hugo Award for Best Fan Writer. This was his seventh Hugo, joining one for Best Novel, two for Best Short Story, and three for Best Professional Magazine. He is the only person to have won Hugos both for writing and editing. He has also won two Nebula Awards for Best Novel. He was declared a Grand Master of Science Fiction in 1992.

His best known solo works are probably the multiple-award-winning Gateway (the first novel of the Heechee Saga), Jem (winner of the National Book Award), and Man Plus. He regularly collaborated with Jack Williamson—the two wrote nearly a dozen novels together, including the Starchild series and The Undersea Trilogy. He also wrote several works with C. M. Kornbluth, including the very famous satire, The Space Merchants.

He was a founder of the famous SF fan group, The Futurians, which also included such future authors as Isaac Asimov and Damon Knight. He served as the editor of Galaxy and If magazines throughout the 1960s. He also worked as a literary agent, with a client list that included Isaac Asimov (again).

Works by Frederik Pohl include: