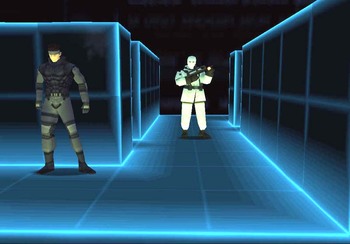 Reality doesn't look anything like this.
"War as a video game — what better way to raise the ultimate soldier?"
— "Iroquois Pliskin", Metal Gear Solid 2: Sons of Liberty

Showing up mostly in Science Fiction settings, the Virtual Training Simulation is Exactly What It Says on the Tin — a training session, or perhaps an exam, set in virtual reality.

It can be done by having the participants put on VR helmets or similar equipment and having the perspective switch to inside of the simulation. Virtual training via Holograms, often made of Hard Light, is also possible. Often also involve Artificial Outdoors Display.

May get dangerous if a Holodeck Malfunction occurs. If it is dangerous or becomes so on a regular basis, it is also a Deadly Training Area. Can be used for a Danger Room Cold Open or an Unwinnable Training Simulation. See also Cyberspace and Training Stage.