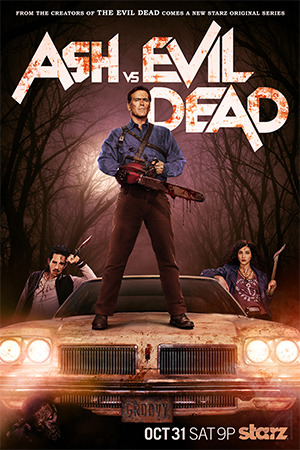 Come on! Come on! Let's go space truckin' Come on!
"Pablo, I'm gonna tell you something I've never told anyone. Thirty years ago, my friends and I spent the night at a cabin. We found the Necronomicon Ex-Mortis, the book of the dead. Certain passages were recited. It awoke something in the woods. Something evil. I was the only one to escape. But now, the evil has found me."
— Ash Williams, "El Jefe"
Advertisement:

Ash vs. Evil Dead is an American horror comedy series created by Sam Raimi and Bruce Campbell for the Starz network. It is set in the Evil Dead franchise and serves as a sequel to The Evil Dead (1981), Evil Dead 2 and (starting with Season 2) Army of Darkness. note Rights issues at the time the series started prohibited them from referencing that film, but they were able to be resolved before Season 2 began filming.

The series stars Campbell reprising his role as Ash Williams, the aging lothario and chainsaw-handed monster hunter who has spent the last 30 years following the films avoiding responsibility, maturity and the terrors of the Evil Dead. When a Deadite plague threatens to destroy all of mankind, Ash is finally forced to face his demons — both personal and literal.

The show premiered on October 30, 2015 and ran for three seasons, ending on April 28, 2018. According to Campbell, this will be the last time he appears onscreen as Ash, though he has continued voicing him in games such as Dead by Daylight and Evil Dead: The Game.

Tropes for single episodes can go in the appropriate recap page.