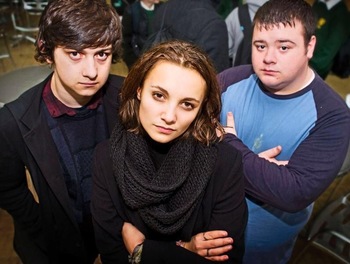 Becoming Human is a BBC Supernatural Soap Opera created by Toby Whithouse. The protagonists are a Friendly Neighborhood Vampire, a wolfgirl, and a timid ghost who is uncertain about the circumstances of his death. Wait, that sounds suspiciously like the premise of another show...

Becoming Human is — to describe it in a sentence — the High School AU of Being Human (UK). It's handled by the same creative team, and began airing online on 30 January 2011, immediately following the Being Human (UK) episode that introduced us to our new vampire.

Becoming Human is playing out like an online interactive game, with various clues to be found in different posts made on the blog.