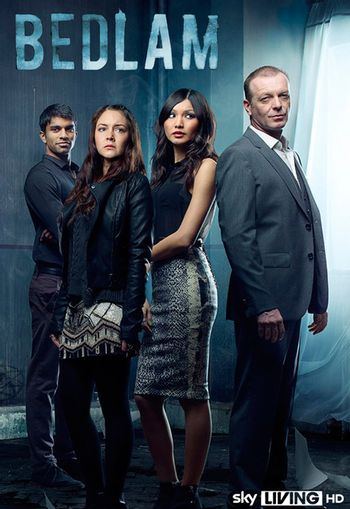 The Bettany family would like to welcome you to Bedlam Heights: affordable luxury apartments currently in renovation in a historic building that been in her family for generations. Admittedly, the fact the building used to be a mental institution has been dissuading tenants, but that's nothing to worry about, right?

Jed Harper sees things differently. Having recently got out of psychiatric care for his habit of seeing ghosts, Jed moves in to Bedlam Heights, on behalf of a mysterious messenger. He shares a flat with Kate, as well as her friends: slacker Molly, whose close friend disappeared earlier, and nerdy Ryan, still haunted by his brother's brutal murder. Jed and Ryan start to work to protect the residents from the many angered spirits of old patients. But it seems that there are deeper shadows in the old house than either could have predicted.

The second series had a substantial cast overhaul, getting rid of most of the established cast and bringing in Ellie, a medium who makes connections between Jed's disappearance and her own sudden spectral visions.

Not to be confused with 1946 horror film Bedlam.