Series / Before We Die 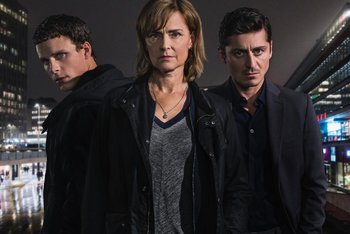 You do not betray the Mimica Familynote In this image though, the only member of the family is the guy on the right, Davor, who is the head.
Advertisement:

Before we Die (Swedish: Innan vi Dör) is a Swedish crime-thriller that aired from January to March in 2017, and is one of the most acclaimed Nordic Noir series the last ten years. The plot follows the cold and unfettered but ultimately well-intentioned police officer Hanna Svensson and her son Christian, who has gone down a criminal path and has a hatred against Hanna for arresting him for possession of drugs, earning him two years of prison.

After those two years, Christian is out again, and life carries on as usual. He has recently gotten a job at a restaurant owned by the wealthy businessman Davor Mimica as a dishwasher, and Hanna now seems to want to regain their connection. But Christian understandably isn't as tempted on that as she is, he probably won't be getting any especially advanced jobs after what she did to him, so it's fair to say that she essentially ruined his future. She nonetheless expresses that she enjoys that he's trying to change his life around, but every time they try discussing it, it ends with Christian trying to run away. In actuality, Christian is doing petty crimes for Davor who is a crime lord and the leading figure in his criminal family, consisting of his mother Dubravka, his father Zvonomir, his sister Blanka who is an aspiring lawyer, and his brothers Pawel and Jovan.

Switching to Hanna's life, she has just visited a colleague, Sven Birgersson, who quickly leaves early in the morning to meet a leak known as "Inez", but while on his way there mysteriously disappears. Considering his likeability and capability as a detective, everyone at their police station panics, and do everything that is needed to find him, and when they get the news that Sven, as well as another man who happened to be at the same place as Sven, was shot dead, they go on a long case through corruption, gangs, and informants to find the true killer, but in the process come across a complex plan made by a low-profile but extremely wealthy family, which Christian happens to have connections to.

A second season came out 2019, once again following Christian, Björn and Hanna. With the Mimica family significantly weakened, they have moved on to another organization; Kretsen (The Circle). It consists of hundreds of corrupt police officers, who take drugs from criminals during search and seizures and then sell it. Christian has been living in Costa Rica under a different identity, but returns to Sweden one day. The Mimica family still want their revenge on Christian, and will do anything to find him.