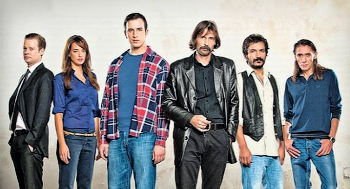 Behzat Ç.: An Ankara Detective Story (Bir Ankara Polisiyesi) is a 2010 Turkish television series based on the novels by Emrah Serbes, and starring Erdal Beşikçioğlu in the title role.

The series details the exploits of Behzat, a troubled detective on the Ankara Police Force. Disdainful of authority figures, plagued by personal demons, short-tempered and unpredictable, he would be ousted from his job if not for his penchant for solving difficult crimes. At work he is aided by an eccentric team of investigators: Harun, Hayalet (Ghost), Akbaba (Vulture), Eda, and Cevdet. Esra, the public prosecutor, also lends the gang assistance on a regular basis.

The series follows the format of a standard procedural, presenting a weekly case that is usually wrapped up by the end of the episode, but also features character arcs and an over-arching mystery that unfolds over the course of a season:

With copious amounts of swearing and alcohol consumption, Behzat Ç. was a frequent target of RTÜK, the national broadcast regulation agency. The show has also been noted for its willingness to confront issues faced by contemporary Turkish society, with episodes tackling topics such as domestic violence, police brutality, political suppression, censorship, and the treatment of minorities such as Kurds, migrant workers, and the LGBT community.

The series spawned two feature films under the Behzat Ç title, Seni Kalbime Gömdüm ("I Buried You in My Heart") and Ankara Yanıyor ("Ankara Burning"). A continuation of the series is currently in development, titled Behzat Ç.: İmamların Öcü ("The Imams' Vengeance").