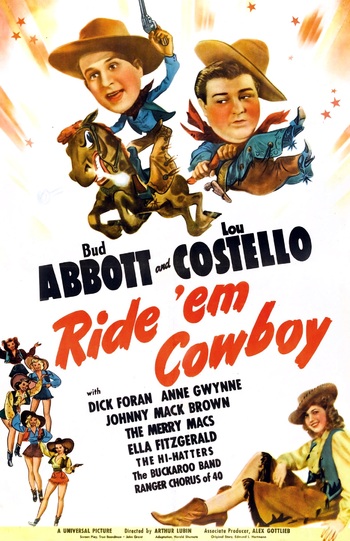 Famed writer Bronco Bob Mitchell, known for his autobiographical western adventures, has never actually been west of the Hudson River in his life. When a newspaper article threatens to expose him as a fraud, Bronco Bob goes on tour singing on horseback across the northeast. His first stop is a rodeo in Long Island, New York. Meanwhile, Duke and Willoughby (Abbott and Costello), two snack food vendors at the rodeo, accidentally let a bull out of its pen while hiding from their angry boss after their latest foul-up. Bob is thrown from his horse when he panics seeing the bull. The bull is stopped by cowgirl Anne Shaw, but she injures her leg in the process, keeping her from winning the ten thousand dollar first prize. A grateful Bob offers her a check for ten thousand as compensation, but she interprets it as a bribe to keep quiet about his incompetence and refuses, though she agrees to keep quiet. Abashed when he hears that winning (or at least competing) would have drummed up business for her family’s dude ranch out west, Bob drops the tour and follows her to the Lazy S Ranch, begging for instruction on becoming the cowboy his books claim him to be. Anne relents, and the two begin to grow close as Bob starts to become legitimately competent. It's fortunate that he's getting competent, too - he's been signed up for the Frontier Days state rodeo championships near the end of the summer. Meanwhile, Duke and Willoughby end up on a train while escaping their boss, and find themselves going much further west than they expected. They eventually meet up with Anne and Bob on the ranch, but not before a faux pas with the local natives that leads to Willoughby being stalked by the tribe, who are determined to have Willoughby marry one of them.

The film is perhaps best known as the movie debut of Ella Fitzgerald, who has a small role as a ranch employee named Ruby who leads a few musical numbers.