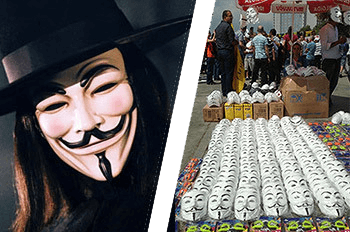 "The revolution will be merchandised!"
Advertisement:

The situation where a work of fiction which features a Real Life product has a significant effect on whether customers want to have that product. The effect can be negative or positive: it can increase demand or reduce it. This trope can also apply to goods and services (a film about a honky-tonk bar might increase enrollment in line dancing lessons, for example).

The effects of this trope are usually temporary; only in Urban Legends does a work "kill" a product for all time. In fact, demand almost always increases for a product featured in a work, even when the product is portrayed negatively; advertisers call this the "Homer Simpson effect". Demand can also increase or decrease for unrelated reasons, so beware of assuming that correlation means causation.

The Trope Namer is the red Swingline stapler prominently featured in Office Space. Swingline didn't make full-size red staplers; the one in the film was a black stapler painted red. Then life would imitate art, as people demanded a red version, and they got one. Outside the U.S., this trope has other names, too. Cooking shows are particularly prone to this: the U.K. sometimes calls this the "Delia Effect", after high-profile Cooking Show host Delia Smith, to the point that her publishers would let the shops know in advance what she was going to recommend. Australia calls it the "Masterchef Effect" for similar reasons.

Defictionalization is when the fictional product comes into existence because of this trope, largely as tie-in merchandise to the show that spawned it. Creators who are trying to evoke this reaction may be getting money from sponsors to feature their products or they might be producing the products themselves.