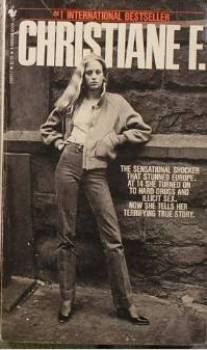 Christiane F. (Original German title: Wir Kinder von Bahnhof Zoo (translation: We, Children from Bahnhof Zoo note  Bahnhof Zoo is a Berlin train station near the Berlin Zoo. As it serves both mainline intercity rail and the Berlin U And S Bahn, it's a major interchange for all kinds of wayfarers, its location near a major tourist attraction aside.) is a 1979 autobiography by a young teenage girl who became a heroin prostitute in Berlin during the late 1970s. Her story was compiled by two journalists who met her when she testified in a court case, who dubbed her as Christiane F. to protect her identity. The book caused a stir in Germany and was translated in many languages, even made into a 1982 movie, featuring the music of David Bowie.

Today, Christiane is still alive, but not in good health. For decades she tried to quit her habit, but always she eventually rolled back into it. She also contracted hepatitis C from an infected needle in the late 1980s. A follow-up to her book, Mein Zweites Leben [My Second Life] was published in 2013, chronicling her life after the release of Christiane F. with the intention of clearing all the false tales and misinterpretations about her life since then and trying to make people aware how she doesn't recommend what she did and what happened to her over all those years at all. In 2014 she publicly announced that she was more or less at death's door and didn't expect to make it much longer. However, as of 2022, she is still alive.

The book and the film provide examples of: