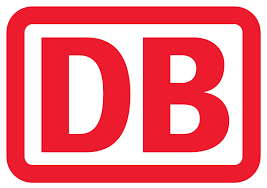 Ah... Germany... Wedged between two seacoasts and the foothills of the biggest mountain range of Central Europe. Criss-crossed by Autobahns and full of people who love complaining about one thing: Deutsche Bahn. Why? Nobody knows.

Deutsche Bahn (officially Deutsche Bahn AG) is the state owned railroad company that owns almost all of the German rail network and still runs most of the trains, despite attempts to introduce "competition" on the regional lines. Formed in 1994 as a merger of Deutsche Bundesbahn (also abbreviated DB albeit with a slightly different logo) from West Germany and Deutsche Reichsbahn from East Germany. Deutsche Bahn runs the longest train network in Europe and carries about two billion passengers a year, mostly without a hitch. Its flagship product is the Intercity Express or ICEnote The letters are pronounced separately, even though tourists like to make fun of the "ice-train" that runs at speed up to 300 km/h note 320km/h on the route to Paris almost immediately after leaving Germany. Germans love complaining about Deutsche Bahn being always late - despite the fact that the airlines are not a bit better and driving only very rarely is faster than even a train that is an hour late. They also love complaining about the prices and the - admittedly bizarre - price system with a number of discounts and surcharges that seem to make no apparent sense (though they are nothing compared to the British National Rail). And unfavorably compare it to either France - where trains stop less and are therefore faster - Switzerland - where almost every place is served by a train several times an hour and connections are timed for each other - or Japan - where, as Germans are quick to point out, getting the train on time is a question of personal honor for the operator. Deutsche Bundesbahn (the West German predecessor) ran a now (in)famous ad which said "Alle reden vom Wetter - wir nicht"note Everybody is talking about the weather - we aren't, which is still present in the public consciousness of many Germans (and has been parodied to death and back) so naturally every time something weather related interferes with the smooth running of trains, people will complain about this "false advertising" from decades ago, some will even claim back in the day the railway actually lived up to its Badass Boast. Another point of contention is the traditionally horrible English of conductors and announcers (all announcements on long distance trains are made in German and English) famously summed up in the phrase "Sank u for dravelling wis Deutsche Bahn, goodbye". This was Truth in Television for a long time, mostly due to the fact that the East German railways had almost as many employees as their West German counterpart despite East Germany being about half as big in size and having only a third of the inhabitants of the West and it was virtually impossible to fire them before they would retire. However, twenty five years after reunification the Easterners that remain either took an English class or are close to retirement anyway. Deutsche Bahn was also increasingly aware of the PR disaster this had created and tried to have someone who actually speaks English make the announcements whenever possible. Deutsche Bahn also runs a couple of S-Bahn systems, most famously Berlin S-Bahn, which they severely fucked up in the late 2000s due to cutting costs in order to appear desirable for a stock market flotation, which ultimately got cancelled by the same politicians that had been clamoring for it for decades. During most of its Dork Age, the CEO of Deutsche Bahn was one Hartmut Mehdorn, who made a number of controversial purchases in an attempt to turn Deutsche Bahn from a national rail company into "the greatest logistics company in the world". Like many business decisions at Mehdorn's previous job, many of those purchases are now rolled back at substantial loss, although DB styled freight locomotives can be commonly seen in other countries, including the UK. Since Rüdiger Grube has taken over, many of the above complaints were actually addressed (Deutsche Bahn's Facebook team for instance is acknowledged to be pretty good at its job even by people who otherwise complain about every single aspect of train travel) but a law change that made long distance buses legal throughout Germany in 2012 has significantly eaten into Deutsche Bahn's profits, even resulting in a loss for fiscal year 2015. (the 2016 numbers were much better, though). Grube however threw in the towel when what was supposed to be a routine contract extension turned out to be yet another round of negotiations about how far to extend his contract (an issue which politicians had promised him to be settled) and Richard Lutz, an accountant and son of a railway worker who had been with the company since 1994 took over. While Lutz is lauded for his calm demeanor and being genuinely a Rail Enthusiast (as evidenced by his gleeful demeanor when opening the new Berlin-Munich high speed line and riding in the cab), he lacks the easy-going charisma and charm of his predecessor and is frequently seen as a transitional solution until Ronald Pofalla (former Chief of Staff of the chancellor) who was a political appointee to the board can take over.

Trains of Deutsche Bahn can roughly be categorized into two main categories, which are Color-Coded for Your Convenience - Long distance trains make less stops and have maximum speeds well above 160 km/h (100 mph) and are usually colored white, whereas other trains usually have top speeds at or below 160 km/h and stop much more frequently, which are usually red. The latter are sometimes run by competitors and all of them receive a state subsidy paid by each of The 16 Lands of Deutschland; the competitors may choose their own names or paint jobs, but the contract that establishes the amount of subsidy usually dictates pretty much every other aspect of the trains as well as their frequency. As such DB Regio (the regional traffic subsidiary of Deutsche Bahn) or its private sector competition are very often Mis-blamed for everything from too small trains to unrealistic schedules or a lack of air conditioning. Long distance trains on the other hand receive no subsidy note  Some very limited Intercity runs do (usually because Deutsche Bahn would otherwise not run that specific train), but that means they are classed as "regional" trains in terms of the ticketing system and they are such a small exception, that they only matter if you are actually on one of those trains and can (in theory) be run by anybody. However, in practice the Loophole Abuse on the part of DB Netz (who owns the tracks and sets the prices for track access) as well as economies of scale have kept the long-distance market limited to Deutsche Bahn and a handful of other state-run railway companies serving international routes as well as state run joint ventures like Thalys, which also serve international routes mainly. This was beginning to change until a 2012 law made long distance buses legal (they had been limited to a few pre-approved routes before), which started out by vastly undercutting DB's prices - even at a cost of an operating loss - thus eliminating the few niches there were for private long distance trains. After Flixbus virtually cornered the German long distance bus market shortly after its emergence they decided to dip their toe into the long distance train network, but they only run a handful of routes a couple of times daily, so they are more of a curiosity than real competition on the rails.

Apart from those there are also three ICE varieties that are intended for use on legacy tracks, filling a gap between IC and ICE services.

For completion's sake, there are a few extra ICE trainsets that have served odd roles over the years:

Introduced in the 1970s, the Intercity was in some sense a predecessor of the Intercity Express, but Intercitys are still available on marginal routes or routes between secondary cities. They stop somewhat more frequently, usually are limited to a top speed of 200 km/h and often still include rolling stock that has seen better days, but recently a new order of bilevel cars in a design more akin to the ICE is intended to remedy this problem. Those are however limited to a top speed of only 160 km/h and due to being bilevel there isn't all that much space for luggage, which led critics to call them "regional trains with a white paintjob". As of 2016 no IC line has a frequency of more than once every two hours, but Deutsche Bahn has announced to change this in the foreseeable future.

Rolling stock for regional trains is much more of a mixed bag and there is no real difference in terms of rolling stock used between Deutsche Bahn and its private sector competitors. Despite the fact that there are clear differences between Regionalexpress (makes more stops than a ICE or Intercity, but less than a Regionalbahn, abbreviated RE), Regionalbahn (a regional train serving pretty much every station, primarily deployed in rural areas abbreviated RB) and S-Bahn (an urban rail form serving every stop in an urban agglomeration, often serving as an addition to U-Bahn (such as in Berlin) or regional trains - usually not abbreviated), some trains serve all three roles. For example the Bombardier Talent II serves as a S-Bahn train in Nuremberg, but also a RE between Dresden and Leipzig, which requires it to be quite a Jack of All Stats.

Germany has a long history of producing railway carriages, especially the factories in the former GDR. Many sleeper carriages in the former Soviet bloc were built in East Germany and ex-DR stock is becoming increasingly common in places like Romania.

Thank you for travelling with Deutsche Bahn, Goodbye.