Literature / The City of Dreaming Books

"But what was the point? I demanded, sitting up with a groan. I nearly went mad, I didn't understand any of it, and I've as good as forgotten it all again."
"It's always the same with demanding literature." 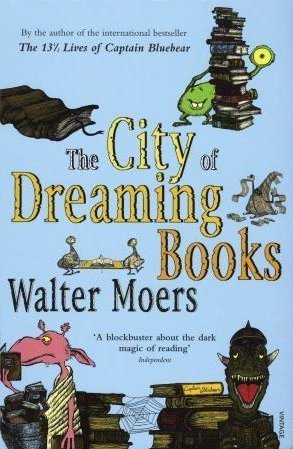 The City of Dreaming Books is a fantasy novel by German author Walter Moers. It's a tribute to books and reading, but also chock full with Lampshade Hanging and tropes of all kinds.

The novel takes place on the fictional continent of Zamonia, which is populated mainly by anthropomorphic animals or other types of imaginary creatures. The story follows Optimus Yarnspinner. Optimus is a Lindworm, and like all of his species, he is destined to become a writer. When Optimus' mentor Dancelot dies, he leaves Optimus his most valuable possession: the greatest manuscript ever written. After reading it, Optimus becomes determined to meet the unknown author, and sets off for the city Bookholm in search of him. Bookholm is a city dedicated entirely to books. The city itself is filled with bookstores, publishing houses, and writers, editors, publishers and critics. Bookholm also sits atop a huge expanse of catacombs, which are filled with the rarest books in existence, as well as large numbers of dangerous creatures. Bookhunters are employed to find books in the catacombs, and the books are so valuable that Bookhunters often resort to boobytraps and murder to get them. In all of this, Optimus begins to search for his mysterious author, but quickly discovers that his quest is more dangerous than he had anticipated.

The City of Dreaming Books provides examples of: