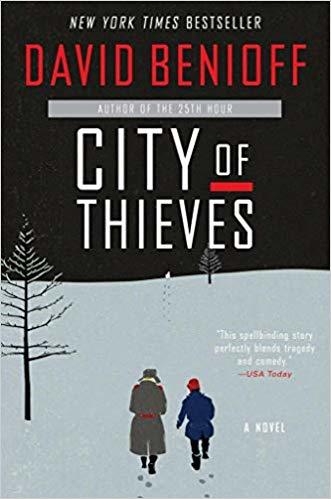 "The birthplace of Bolshevism, that city of thieves and maggots."
— Adolf Hitler (on Leningrad)
Advertisement:

A popular 2008 novel by David Benioff (who would become better known years later as co-showrunner of Game of Thrones) that takes place during the siege of Leningrad.

In its concise 258 pages, it tells the story of Lev, a timid Jew doing his best to survive the harsh winter with no food or supplies. One day, while Lev and his friends were on the roof of their apartment building, they see a dead German paratrooper fall from the sky, and they quickly rush to the body and loot it (Lev gets a fancy German knife). While they're robbing the corpse, the NKVD arrive to arrest them for illegal looting (and by "arrest" we mean "shoot dead on the street"). His three friends get away, but Lev is caught after helping one go over a fence. Instead of shooting him right then and there, they take him to the Crosses, a famous convict prison, to spend the night. There, Lev meets Kolya, a coarse and talkative army deserter.

The next morning, Lev and Kolya are escorted to an NKVD headquarters. There, they meet Colonel Grechko, who feeds them and tells them of his daughter's upcoming wedding. He says he is in need of a dozen eggs to make the cake, with eggs being among the rarer things to find in a besieged Leningrad. So Grechko asks them to go all over Leningrad to find these eggs in exchange for their ration cards back (which he took prior to asking them).

The rest of the story follows from there; Lev and Kolya traveling through Russia in search of these eggs.

Not to be confused with the Fighting Fantasy gamebook of the same name.

City of Thieves provides examples of: