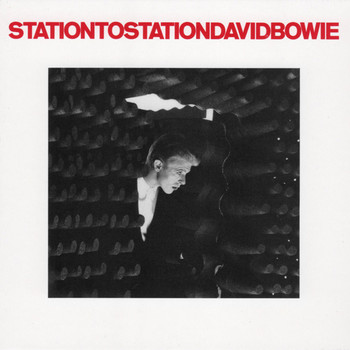 Station to Station is the tenth studio album by David Bowie, released in 1976. It is seen as a precursor to his "Berlin Trilogy" (Low, "Heroes" and Lodger), which began the following year.

It's a Concept Album built around a character named The Thin White Duke, a character Bowie thought up while writing a story called "The Return of the Thin White Duke" during the filming of The Man Who Fell to Earth, a still of which is used for the album cover. This eventually resulted in this music album, influenced by Krautrock music, which would be explored much closer in the Berlin albums that followed.

It was recorded in Los Angeles while Bowie was suffering a full-blown cocaine-induced psychotic breakdown and had just finished appearing in the Cult Classic The Man Who Fell to Earth. He claimed in interviews he remembered nothing about the recording other than describing the guitar sound he wanted on the title track to the session musician, but there are many stories about his behaviour at the time.

Station to Station was commercially successful upon release, peaking at No. 5 on the UK Albums chart and No. 3 on the Billboard 200, as well as being certified gold in the UK, the US, and Canada.

Station to Station was supported by three singles upon its initial release: "Golden Years", "TVC 15", and "Stay". A heavily truncated version of the Title Track was also released as a promo single in France. Bowie's cover of the Johnny Mathis song "Wild Is the Wind" was later released as a single in 1981 to promote the Greatest Hits Album Changestwobowie, on which it was included.

This week troped past me so slowly; the days fell on their knees...: