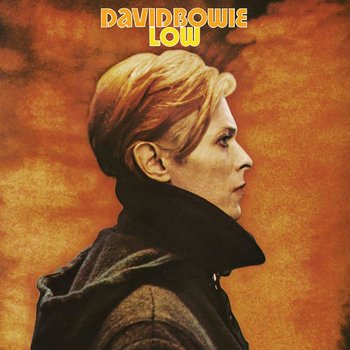 "Sometimes, you get so lonely..."
"Two sides of Bowie you've never heard before."
—Tagline from the album's advertising campaign.
Advertisement:

Low is the eleventh studio album by David Bowie, released in early 1977. It is the first of his "Berlin Trilogy", a Thematic Series that also comprises its two follow-ups: "Heroes" from late 1977 and Lodger from 1979 (despite this, most of the album was actually recorded in France).

Having recently become embroiled in controversy after getting Lost in Character as the Thin White Duke and making a number of pro-fascist statements on live TV, Bowie realized just how deeply his state of mind had been damaged by his cocaine addiction, and retreated to Europe with personal friend and fellow junkie Iggy Pop to rehabilitate, bouncing from Switzerland to France to West Berlin. While there, he became interested in Krautrock musicians such as Kraftwerk and Neu! as well as the works of Brian Eno (later a major contributor to the album; he and Bowie had already been communicating on and off since 1973).

Bowie had already incorporated elements of these influences to Station to Station, but began to dive more deeply into them here, first probing their potential while producing Pop's The Idiot before using these elements for his own songs (The Idiot would end up releasing after Low, allegedly because Bowie didn't want to look like he was imitating Pop). However, unlike The Idiot, which took an aggressive industrial approach, Low would be far more minimalist, ethereal, and instrumental-centric, owed in part to the turmoil of the rehabilitation process and the collapse of his first marriage; he would ultimately divorce in 1980.

Setting a template for the following two albums in the Berlin Trilogy, Low distinguishes itself by taking a different approach to its style on each side of the record, influenced by Eno's 1975 albums Another Green World and Discreet Music (especially the former). Side one is a collection of short avant-pop pieces with lyrics that reflected Bowie's state of mind at the time, while side two is themed around longer ambient compositions rooted in the atmosphere of the Cold War. "Heroes" would take a similar approach, while Lodger would divide itself between a side of travel-themed songs and a side of introspective songs.

Low was supported by three singles: "Sound and Vision", "Be My Wife", and "Breaking Glass" (the latter being exclusive to Australia). "Be My Wife" also featured Bowie's first traditional Music Video since "Life on Mars?" in 1971 (other music videos between them were simply recordings of Bowie in concert), being very similar to its predecessor from a visual and cinematographic standpoint.

"Baby, I've been breaking tropes in your room again":