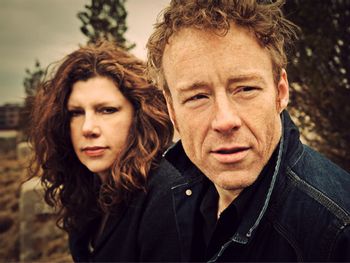 Mimi Parker (left), Alan Sparhawk (right), the driving forces of the band.
Low are a Minnesotan Alternative Rock band formed in 1993, chiefly known for being largely the Trope Namer for the silly-titled subgenre Slowcore.
Advertisement:

The band's concept began as a joke between guitarist Alan Sparhawk and bassist John Nichols of indie band Zen Identity, wondering what would happen if they tried playing quieter music to the loud, Grunge-oriented alternative crowds of Duluth. Growing serious about trying, Sparhawk and Nichols left Zen Identity, and formed Low with the addition of Sparhawk's wife Mimi Parker on a drumkit consisting entirely of a cymbal and a floor tom.

While the bassist position underwent some changes, and the band later moved towards experimentation with electronic music, Low's music is largely centered around some easily identifiable traits:

After being diagnosed with ovarian cancer in 2020, Mimi passed away 5 November 2022

Not to be confused with the seminal David Bowie album.