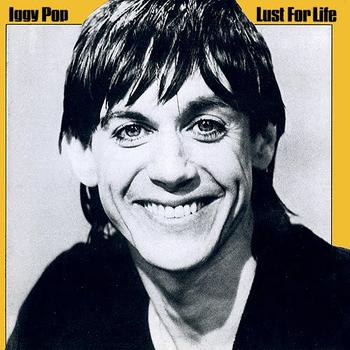 "Well, I'm just a modern guy / Of course, I've had it in the ear before..."
Advertisement:

Lust for Life is the second studio album by Iggy Pop, released in 1977. It was released in the same year as his first solo album, The Idiot and is the second of three to be co-produced and co-written by David Bowie (the third being 1986's Blah-Blah-Blah). Unlike The Idiot, which was primarily a Berlin Trilogy prototype, Lust for Life moves closer into the style of Pop's earlier work with The Stooges, being a Hard Rock album rooted strongly in his Proto Punk background with his former band. Bowie would later cover both "Tonight" and "Neighborhood Threat" on his 1984 album Tonight, which itself featured two original songs co-written by Pop.

Like its predecessor and Bowie's Berlin Trilogy, the album would be cited as a major influence on the Post-Punk movement.

Lust for Life was supported by one single: "Success".

This album is not to be confused with the 1956 film about Vincent van Gogh starring Kirk Douglas in the starring role.

I got the lust for tropes: