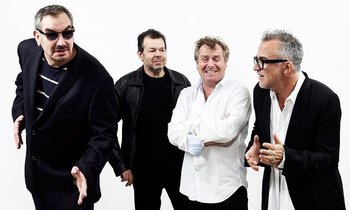 The Pop Group are a Bristol band formed in 1977. They are one of the pioneers of Post-Punk and Dance-Punk music, combining the energy of Punk with Free Jazz, Funk, Dub, and a distinctly radical and paranoid political stance. Their initial lineup included vocalist Mark Stewart, guitarists John Waddington and Gareth Sager, bassist Simon Underwood, and drummer Bruce Smith. Dan Catsis replaced Underwood on bass for their second album, and their current lineup includes Stewart, Sager, Catsis, and Smith.

They released two albums during their initial run, Y (1979) and For How Much Longer Do We Tolerate Mass Murder? (1980) before breaking up in 1981. Mark Stewart went on to be the Trope Maker for Industrial Hip-Hop, and helped a young musical collective called The Wild Bunch - who would soon evolve into Massive Attack and launch the Trip Hop movement of the 90s - get their start. Meanwhile, Gareth Sager and Bruce Smith formed respected Post-Punk band Rip Rig + Panic (best known as an early project of Neneh Cherry), whilst Simon Underwood joined Pigbag in time for them to have a modest UK Dance hit with "Papa's Got a Brand New Pigbag".

They reformed unexpectedly in 2010, releasing a surprise third studio album (and their first in 35 years), Citizen Zombie, in 2015. Their fourth, Honeymoon on Mars, followed in 2016 with production from Y producer Dennis Bovell and The Bomb Squad's Hank Shocklee.

While never commercially successful, they are hugely influential in the more chaotic Alternative music scenes. "We Are All Prostitutes" directly inspired Nick Cave during The Birthday Party's transition from their early New Wave sound, and Y influenced artists such as Nine Inch Nails, Primal Scream, Mike Watt of Minutemen, and Thurston Moore of Sonic Youth.