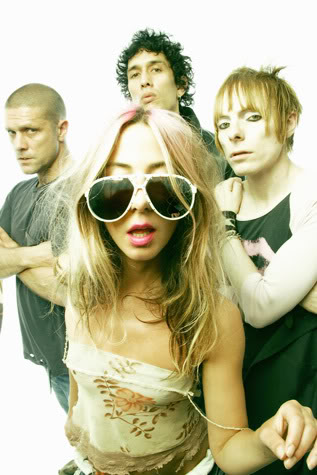 Queenadreena are a British alternative rock band (although the exact genre is up for dispute- some people refer to them as 'goth'n'roll') which was formed in 1999 in London by vocalist Katie-Jane Garside and guitarist Crispin Gray, both formerly of the punk band Daisy Chainsaw. They initially wrote their name Queen Adreena, but made it a single word soon after the release of their first album, Taxidermy. Since then the band have had a steady and stable career despite frequent lineup and label changes, but no breakthrough success.

The band's music is dark and often quite heady, eerie and desperate sounding, with the lyrics, when not open to multiple interpretations as they so often are, usually tackling difficult subjects such as anorexia ("My Silent Undoing") and the murder of Jon Benet Ramsey ("FM Doll"). The videos match: strange and grainy, and occasional doses of horror.

Many members of the band have side projects, which they develop alongside Queenadreena. Katie Jane sings for Ruby Throat, and has a released a collection of her own songs under the name 'Lalleshwari', and in 2006 Crispin and Nomi founded a band of their own, the Dogbones. The band have also composed a live soundtrack to David Cronenberg's film Crash.