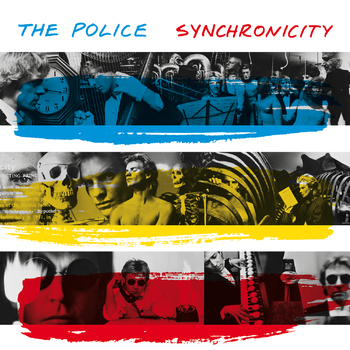 With one breath, with one flow
You will know Synchronicity
You consider me a young apprentice
Caught between the Scylla and Charybdis
Hypnotized by you if I should linger
Staring at the ring around your finger

I have only come here seeking knowledge
Things they would not teach me of in college
I can see that destiny you sold
Turned into a shining band of gold
— "Wrapped Around Your Finger"
Advertisement:

Synchronicity is the fifth and final studio album by English-American Post-Punk/New Wave Music band The Police. It was released through A&M Records on 17 June 1983.

Marked by a shift to a smoother, jazz influenced sound that would foreshadow the style of Sting's solo material, it went through a Troubled Production that bled heavily into the music. Sting had just divorced from his wife and songs like "King Of Pain", "Every Breath You Take" and "Wrapped Around Your Finger" reflected his feelings at the time. More significantly, the band was on the verge of falling apart, having long been at each other's throats over Creative Differences that were finally spilling over: they recorded in separate rooms because they couldn't stand being in each other's presence. Copeland had to record his parts in the studio's dining room, Sting in the control room, and Summers recorded his parts in the actual studio, and overdubs had to be done with only one member in the studio at a time.

Tensions reached the peak with the recording of "Every Breath You Take": fights between Copeland and Sting were becoming increasingly common, and culminated when Sting and Copeland got into a full-on fist fight during the recording of this song. Hugh Padgham, the producer of the album, nearly walked out and cancelled the recording sessions completely, but a meeting with the band's manager Miles Copeland (Stewart's brother) helped the band continue recording the album. Nevertheless, the incident showed how quickly the band was falling apart, and after a brief hiatus following this album (during which Sting put out his first solo album, 1985's The Dream of the Blue Turtles), the band would split for good in 1986 following one final heated argument over—of all things—which drum machine to use for a re-recording of "Don't Stand So Close to Me".note The full story is much more complicated than that; Copeland had broken his collarbone in a horse riding accident, leaving him unable to play the drums for a while and preventing the band from being able to diffuse tension by jamming out, thus leaving nothing to stand in the way of a straw rushing in to break the camel's back after years of infighting.

Despite the tense conditions the album was recorded under, it ended up becoming a massive critical and commercial success, topping the charts in the UK, the US, Australia, Canada, Italy, and New Zealand, selling over eight million copies in the United States alone, and going on to become the third highest-selling album of 1983 in the US & Canada, the eighth highest-selling album of 1984 in the US, and the 11th highest-selling album of 1983 in the UK. The record was later certified octuple-platinum in the United States, platinum in the UK, Canada, France, and New Zealand, and gold in Germany, Hong Kong, and the Netherlands. In both the US and the UK, the album stayed on the top of the charts for 17 non-consecutive weeks, breaking the American dominance of Michael Jackson's Thriller for a short period of time.

The creative process behind the making of the album was subject of an episode in the documentary series Classic Albums.

Bonus track on most CD and cassette releases

There's a little black trope on the sun today: