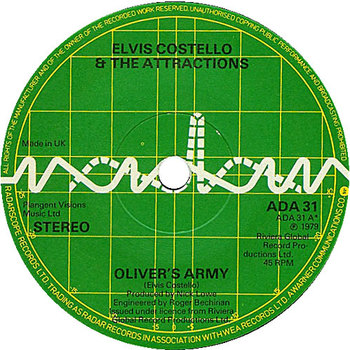 Radar Records was a short-lived but influential UK label from the Post-Punk era.

In late 1977, Stiff Records co-founder Jake Riviera, who was also the manager of Elvis Costello and Nick Lowe, had a falling out with his partner Dave Robinson. Riviera left Stiff, taking Costello and Lowe with him, and decided to start a new label. He joined forces with Andrew Lauder, a respected executive at Liberty/United Artists Recordsnote Lauder originally worked at Liberty, which was absorbed into UA in the early 1970s, who had signed acts ranging from The Bonzo Dog Band to Buzzcocks. Together, Lauder and Riviera formed Radar Records, with financial backing from WEA Records; the first releases emerged in February 1978.

With Costello and Lowe providing a (seemingly) solid sales base, Lauder began assembling a stable of mostly British acts, with a few Americans and Europeans mixed in. The roster included Punk Rock (Iggy Pop and James Williamson, Richard Hell and the Voidoids, Metal Urbain), psychedelia-tinged New Wave Music (The Soft Boys), Power Pop (Yachts, Bram Tchaikovsky, Pezband), Hard Rock (The Good Rats), British R&B (The Inmates), Rockabilly (Ray Campi, Mac Curtis), Krautrock (La Düsseldorf), and even a Singer-Songwriter (Loudon Wainwright III) and Recorded and Stand-Up Comedy (National Lampoon). Lauder also signed The Pop Group, whose Avant-garde Music reportedly scared WEA's American labels away from distributing the label there. (Radar eventually signed a licensing deal with US Polydor that included the Inmates, the Yachts and Bram Tchaikovsky.) Radar also did some interesting reissues, including a 12" EP of early Pere Ubu singles, Garage Rock from the WEA catalogue (The Shadows of Knight, The Electric Prunes) and Psychedelic Rock from the Texas label International Artists (The 13th Floor Elevatorsnote Lauder had tried to sign the Elevators to UK Liberty, but their manager wanted too much money, The Red Krayola; Radar also released an album and single by the late 70s version of the Krayola). In short, Radar had an insanely eclectic roster...

...that turned out to be far too diverse for WEA's tastes, especially since few of Radar's acts besides Costello and Lowe sold to expectations. (The fact that the entire music industry had suddenly slumped after years of being hugely profitable didn't help.) Therefore, Radar was more or less shut down at the end of 1979. Riviera and Lauder formed F-Beat, yet another new label for Costello and Lowe, which was distributed by WEA and then RCA; meanwhile, WEA kept the Radar imprint alive for a few final releases by the Inmates, Yachts and Bram Tchaikovsky and one stray new act, Power Poppers DJ Kane and the Millionaires. Radar Records made its last releases in early 1981...

...and that was the end until The '90s. With Britpop taking off and acts like Nirvana and Green Day selling millions, the UK branch of Warner Music Group (the corporate successor to WEA) decided to start a semi-indie label with the credibility to attract fresh new talent. Therefore, a revived version of Radar began in 1995, funded by WMG but distributed by indie specialists Pinnacle. Headed by veteran small label exec Rob Collins (whose previous companies K.422 and Product Inc. had worked with bands like Swans), the revived Radar signed bands like Power Pop Power-Trio Midget, Grungy American group Morning Glories, artsy Prolapse, funky Acacia, World Music combo Summit, Glam Rockers Heave and Glitterbox, and angsty Pure Morning. The Pop Group even reissued some of their older work. However, only Midget and Acacia sold in large enough quantities to please Warner, and by the fall of 1998 Radar Records had fallen off the radar once again.