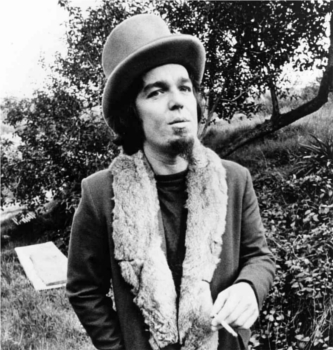 The Captain, wearing his signature 60s dress.
"With pop hits provin' unlikely, Captain Beefheart retreated to a cabin to shout at his band for months on end. The result was Trout Mask Replica."
—Scary Go Round, on the man himself.

"I may be hungry, but I sure ain't weird..."
Advertisement:

Captain Beefheart was the stage name of American avant-garde musician and painter Don Van Vliet (January 15, 1941 – December 17, 2010); a friend, collaborator, and sometime-rival, of contemporary Frank Zappa, who he'd known since high school. As the leader of Captain Beefheart and His Magic Band, a band with constantly shifting membership, he released a dozen albums to highly varied critical review; with Trout Mask Replica often considered his magnum opus. His highly mutable style incorporated elements of Blues, Psychedelic Rock, Jazz, Rock & Roll, and experimental compositions and is sometimes seen as Outsider Music.

Though never achieving the (marginal) commercial success enjoyed by Zappa, despite their musical similarities, Van Vliet is considered to be highly influential across many genres, with numerous musicians citing him as a major influence — some examples being punk rock pioneers Sex Pistols and The Clash, Tom Waits (whose career can be easily separated into pre- and post-introduction to Beefheart), Sonic Youth, The Red Hot Chili Peppers, PJ Harvey, The White Stripes, The Residents, Robyn Hitchcock, and Joan Osborne. He's also well-known for the mythology he created around his band and persona; with most of his comments to the media deliberately bearing little connection to the truth, or often reality in general.