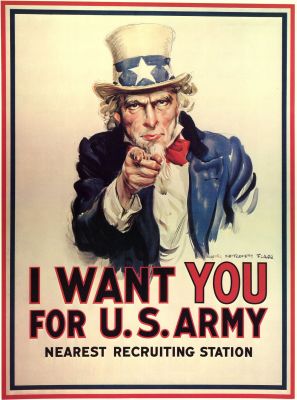 Because the best way to convince people to go along with your cause is to point at them. And put on a Death Glare. And, you know, ask them to.
Advertisement:

The famous World War I-era poster of the Anthropomorphic Personification of the United States of America imploring young men to enlist in the military by Giving Someone the Pointer Finger. Usually depicted as an old guy with a beard, a top hat and a suit decorated with the Stars and Stripes. The famous American poster, created by J.M. Flagg (no kidding) in 1917, is actually based on a British poster from several years earlier, featuring Secretary of State for War Lord Kitchener and the famous legend "Your Country Needs YOU".

It is yet another common Art Imitates Art situation, the most popular subversion of which is to use the pose as an anti-war protest instead. Other parodies substitute Uncle Sam entirely with some other character wanting you to do whatever they want, whether it is to join some other war effort, to go about with some form of community service, or simply "to shut up".

Compare Sean Connery Is About to Shoot You.