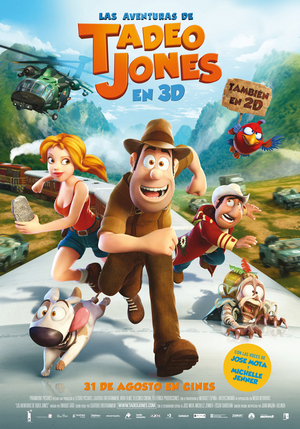 It tells the story of Tad Stones: a construction worker and archeology enthusiast who wants to be an Adventurer Archaeologist just like his idol Max Mordon. His friend, Professor Humbert in summoned to Peru to meet with another researcher, Professor Lavrof, who has discovered what might be the key to the location of the lost city of Paititi, where the Incans have hidden their golden treasure. Furthermore, the city is believed to contain a golden statue that makes those who hold it immortal, created so that the Incan guardians could defend their treasure forever. However, Humbert suffers an unexpected (but harmless) accident and Tad has to go in his place. Unfortunately, a gang of pirates and mercenaries called the Odysseus is after the artifact too, and Tad arrives to find that Lavrof has been kidnapped. Joined by Lavrof's daughter Sara and their Soap Opera-obsessed enthusiastic salesman employee Freddy; they now have to go on a wild journey to find the treasure before the Odysseus, rescue the professor, and hopefully come out alive.