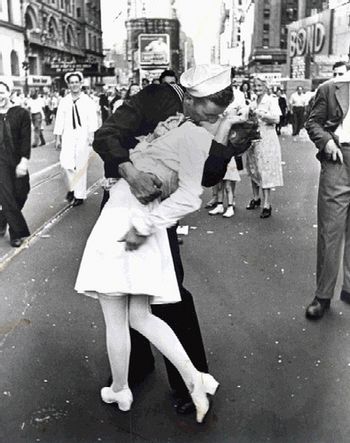 "She ran out into the street, and a sailor embraced her and kissed her. Feeling gratitude for the services rendered by the U.S. armed forces, she let him do it. Plus, he was trained to kill people, so there's that."
— Cracked, "6 Famous People Whose Identities We Still Don't Know"

The famous kiss an ecstatic sailor plants on a very surprised nurse he just grabbed off the street for the express purpose of kissing (see page image) when the end of World War II is announced in New York City is the most commonly parodied VDay photograph, though there are others.

Taken by Alfred Eisenstaedt and originally appearing in Life Magazine, the subjects of the photo melted into the crowd before he could catch their names. As a result of this, and the natural obfuscation of the subjects' features, several different people have come forward claiming to be the kisser and kissee.

Likely the modern Trope Codifier for The Big Damn Kiss and a Real Life example of a Smooch of Victory.

See Foot Popping for what that nurse was doing with her right leg. She also seems to manage the Boobs-and-Butt Pose.note Putting several fictional examples to shame with over 45 degrees of rotation between torso and pelvis.

Silhouette kisses the nurse on VJ Day before the sailor gets a chance.

Silhouette kisses the nurse on VJ Day before the sailor gets a chance.