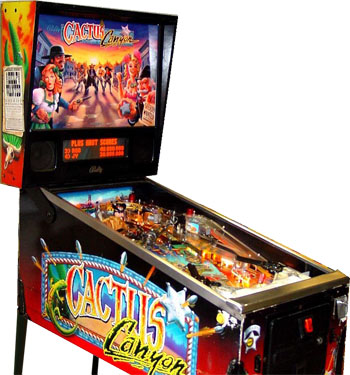 What's a dazzling urbanite like you doing in a rustic setting like this?
Are you good with a gun? Have eyes in the back of your head? Heal quickly and currently single? Then please consider the highly volatile, exciting world of law enforcement!
Advertisement:

Welcome, stranger, to Cactus Canyon! I'm Mayor Cheetum, and we're in need of a stout, daring, heroic, and intellectually challenged recruit like yerself for the position of sheriff! Once we get you fitted with a slightly-used uniform, you can help clean up a few problems around here — the Bart Brothers are runnin' loose, we're due for a stampede any minute now, the bank's bein' robbed, and Miss Polly's gone off gettin' in trouble again. Prove your worth and you'll be rewarded with a generous Bounty, and I'm sure you'll do fine when the Bad Guys come by at High Noon. From the look of things, I'm sure you'll make Marshall in no time, and we've got a complimentary cemetery plot in the Distinguished Sheriffs' section of Boot Hill waitin'!

Cactus Canyon is an arcade pinball game designed by Tom Kopera and Matt Coriale, with artwork by John Youssi. It was released in 1998 by Williams Electronics (under the "Bally" label); it is distinguished for being the company's last conventional pinball prior to the ill-fated launch of the "Pinball 2000" platform.note See Revenge from Mars and Star Wars Episode I for details In fact, the game was rushed to completion before the switchover, and only 903 Canyon tables were manufactured.

The table fetches high prices in the collectors' market, with sellers citing its scarcity, humor, and balanced gameplay as reasons for the cost. This has resulted in Hype Backlash from others, who consider the game merely So Okay, It's Average, with an overly-easy difficulty, a somewhat shallow ruleset, and some rough edges that don't warrant the hyped-up prices.

In 2012, Eric Priepke finished "Cactus Canyon Continued," a project that updated Cactus Canyon with an expanded and complete ruleset, including new game modes and animations. The code is available for free online, and requires only a Cactus Canyon table and P-ROC

A digital version of Cactus Canyon was once available for The Pinball Arcade before FarSight Studios' license to the Bally and Williams tables expired on July 1, 2018.

A remake of Cactus Canyon is in development by Chicago Gaming Company. The machines will boast improved lighting, toys, and completed code that's closer to the original development team's vision. The more expensive models will feature a topper that functions as shooting gallery mini-game. Enhanced software by ex-Stern Pinball programmer Lyman Sheats and pinball player Josh Sharpe will also be purchasable at a later date.

Mayor Cheetum: Thank you for cleaning' up Cactus Canyon!