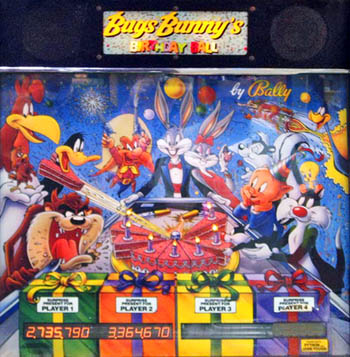 Bugs Bunny: For me?
"The game gave off a whiff of something slapped together the night before it was due, like maybe the pinball engineers had this 100% rad Road Runner idea, but couldn’t get the physics to work, so one of them looked at the calendar, did some quick arithmetic, and said, 'Hey, Bugs turns fifty this year, screw this Road Runner stuff. Let’s design a birthday party pinball game!'"
—"Reports from the Pinball Scene: Column 2,"

Bugs Bunny's Birthday Ball is a pinball machine released by Williams Electronics (under the Bally label) in 1990. Designed by John Trudeau and illustrated by Python Anghelo and John Youssi, this was the second last pin from Bally to use an alphanumeric display, and the second of only three licensed pinball tables ever to feature the Looney Tunes characters (the first being Atari's prototype Road Runner table and the third being Sega's Space Jam).

The game is a celebration of Bugs Bunny's 50th anniversary, accompanied with his various co-stars and lots of cake. Use the Skill Shot to help Wile E. Coyote chase the Road Runner, break some eggs in the reversed Chicken Coop playfield, then ride the Tweetie Slide to the main playfield. Hit Daffy Duck for a Big Score and light Speedy Gonzales' "Keekout", then shoot the center ramp so the Tasmanian Devil can go shopping. If you can help Bugs blow out the candles, Honey Bunny might reward him with a 50 million bonus — and maybe you'll get your opponents' best score for a Surprise Package.

Word of God from Python Anghelo is that the game was quickly rushed through development to fill a gap in the Bally production line. Unfortunately, it shows, as Bugs Bunny's Birthday Ball is often considered one of the weakest games from Williams and a disappointing waste of the license. The Chicken Coop crowds up the playfield for little value, there's a dearth of modes and satisfying shots, and the 50 Million shot and random score-switching "Surprise Package" makes it useless for competitive play. Only around 2,250 tables were manufactured, but there is little interest from either pinball collectors or animation buffs.