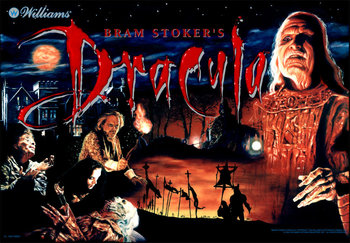 "Welcome to my home."
Advertisement:

Bram Stoker's Dracula is a 1993 pinball game based on the 1992 film of the same name by Williams Electronics. It is designed by Barry Oursler.

The goal is simple: Kill Dracula, kill his concubines, kill his werewolves, destroy his rats, scare his bats, and overcome Dracula's mist. It's pretty standard pinball fare, with video modes, ball locks (known as Castle and Coffin Locks), and other such pleasantries. Its main gimmick is its three multiball variations - one of which is "Mist Multiball", where a magnet would drag the ball across the field until it was knocked loose by another to start it. More noteworthy is "Multi-Multiball" - all the multiballs are started independently, and it is possible (and highly encouraged) to run two, or even all three, at the same time. It's held in high regard by many players for its gameplay, which manages to be fast, simple, yet deep all at the same time, requiring true mastery for high scores.

The game was also known for being for "loop friendly", since you could get an infinite loop by shooting it into a certain spot. In keeping with the film, the dot matrix was done in a unique red coloring. You can see a playthrough of it here

A digital version was formerly available for FarSight Studios' The Pinball Arcade before their license to all Williams and Bally tables expired on July 1, 2018.

The pinball table provides examples of:

Dracula: "We shall do battle once more."