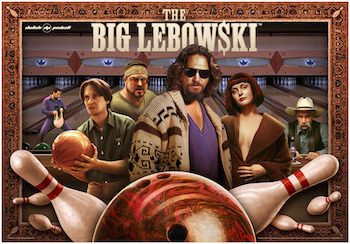 The Big Lebowski is a Licensed Pinball Table based on The Coen Brothers' Black Comedy movie by Dutch Pinball. It was developed by Barry Driessen, with artwork by Freek van Haagen, Jean Paul de Win, and Guus Fingskes.

Not surprisingly, the game revisits the movie in a cavalcade of quotes, characters, and events, all interspersed with bouts of bowling. Mix up a White Russian, smash the Corvette, bounce on the Trampoline, have a Nihilist Showdown, and scatter Donny's ashes. Unroll the Rug to enable multiball, move The Dude's car, then Mark It Zero and Let's Go Bowling. If you can gather all five characters, accomplish the six Rug Modes, and complete the six game goals, you'll enable the Wizard Mode where The Dude Abides.

Dutch Pinball first teased The Big Lebowski pinball in May 2014, quickly gathering attention from pinheads and moviegoers alike. After appearances at European pinball expos and a launch party in September, the game ran into difficulties when Universal threatened to pull the license due to Dutch Pinball's use of unapproved art, and accusations of financial fraud surfaced. Fortunately, issues were straightened out soon afterward, and the game was finally released in April 2016.

The Dude: "The Dude abides."