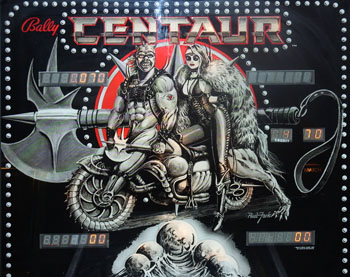 Centaur is a Physical Pinball Table released by Bally in 1981. It was designed by Jim Patla and illustrated by Paul Faris.

The first and most defining aspect of Centaur is its striking visual design, with its predominantly black and white art punctuated by bursts of red and amber. The backglass is dominated by the game's Centaur, a hulking half-man half-motorcycle creature carrying a leather-clad punk woman on his back. Between the artwork and dark theme, reverberating background, and Machine Monotone voice, this is a hauntingly memorable table, reminiscent of Heavy Metal or Bio Punk.

Centaur was only a modest success for Bally, selling around 3,700 tables, but there was enough demand that the company released Centaur II in 1985. Despite the name change, the game was the same, except for the cabinetnote it used the same modernized design by Dennis Nordman, as seen on Mr. & Mrs. Pac-Man Pinball and some internal changes.

A digital version of Centaur was formerly available on The Pinball Arcade until the license to all WMS tables expired on July 1, 2018.