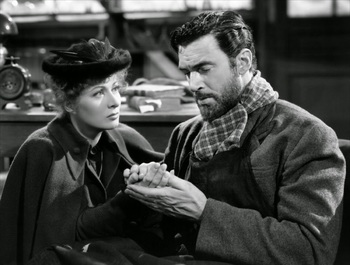 It's a biopic about the life of, yes, Marie Curie (1867-1934), born Marie Sklodowska in Poland. The film starts with Mademoiselle Sklodowska (Garson) studying at the Sorbonne in Paris. Marie has hardly any money for food and spends almost all her waking moments studying anyway, which is why she faints one day from hunger in the middle of class. A friendly teacher invites her to a party where she meets Pierre Curie, a well-known physicist.

Pierre invites Marie to use his lab for her studies. Eventually they fall in love and get married. While raising a family, they do pioneering work in the field of radioactivity, finally discovering a new element, radium. However, tragedy spoils their happiness.

Fourth of nine films to pair Garson and Pidgeon. Robert Walker, soon to become a major star, has a small part as Pierre's lab assistant. Ditto Van Johnson, who has an even smaller part as a reporter that interviews Marie. See also Radioactive, a 2020 movie covering the same events starring Rosamund Pike as Marie Curie.