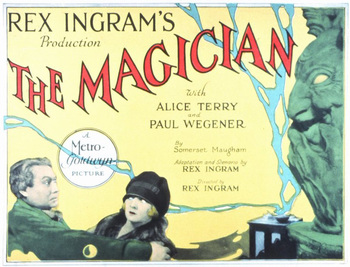 Margaret Dauncey (Alice Terry) is a young woman in Paris who has already achieved success as a sculptor. One day her latest sculpture, a massive statue of a faun she is carving in clay, cleaves apart under its own weight and falls on her. She suffers a severe spinal injury. Luckily, visiting American surgeon Dr. Arthur Burdon is there in Paris and is able to operate on Margaret and save her from paralysis. He falls in love with his beautiful patient and, after she is discharged from the hospital, they get engaged.

Unluckily, one Oliver Haddo is among the med students observing the operation on Margaret. Haddo, described as a "Hypnotist, magician, and student of medicine", is studying medicine, not to really become a doctor, but to assist in his dark experiments in alchemy. Haddo in fact wants to "create life" through an alchemical ritual that requires, among other things, "the heart's blood of a maiden". He finds his victim in Margaret. Soon he has used his hypnotic powers to get Margaret to marry him and go away with him. Burdon must find Margaret and rescue her before Haddo kills her as part of his ritual.

The final act, in which Haddo goes to his lair at the top of a stone tower, and puts Margaret on a table while he and his little person assistant conduct the ritual to create new life, is very reminiscent in look and story to Frankenstein, made five years later.

Not to be confused with the 1958 Ingmar Bergman film Ansiktet, known as The Magician in the U.S. A young Michael Powell worked as an assistant director.