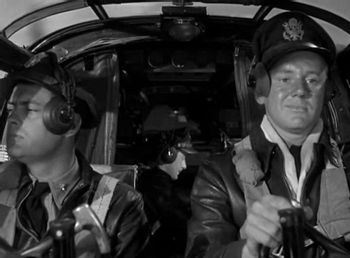 Off we go, into the wild blue yonder...
Advertisement:

In the days after the attack on Pearl Harbor. Lt. Col Jimmy Doolittle (Tracy) assembles a group of volunteers to man B-25 bombers for a mysterious mission. Among those pilots is Lt. Ted Lawson (Johnson), who just got married a few months ago and whose wife Ellen has just told him she's pregnant. Johnson and his crew—co-pilot Dean Davenport, bombardier Robert Clever, navigator Charles McClure, and tailgunner Cpl. Robert Thatcher (Walker)—start practicing unusually short 500-foot B-25 takeoffs. Lawson's crew and all the other crews get a clue when a naval officer shows up to coordinate their drills, but not until their planes are aboard the carrier USS Hornet and the men are out to sea are they told their mission. They will be taking off from the Hornet and conducting the first Army Air Force bombing raid of Japan. And because they are taking off from so far out, it's a one-way trip. The men will have to land somewhere in China (if they make it that far), evade capture by Japanese forces in China, and make it to safety in the Nationalist Chinese capital of Chongqing.

The Doolittle Raid inspired no fewer than four films, including Cary Grant vehicle Destination Tokyo, but the other films were heavily fictionalized, while Thirty Seconds Over Tokyo was made to be an accurate account of the real history of the raid. Robert Mitchum had one of his first big parts in this film, as another bomber pilot.

Despite being the Trope Namer for the trope Thirty Seconds Over Tokyo, that trope is not found in this film, as there are no scenes set in Japan.