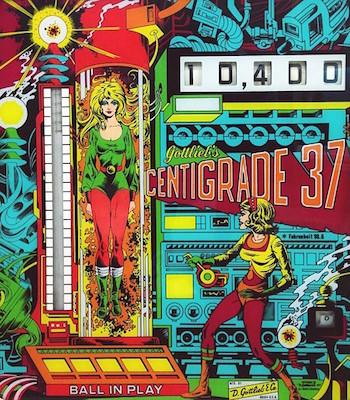 Centigrade 37 is a one-player electro-mechanical pinball machine released by Gottlieb in 1977, designed by Allen Edwall and illustrated by Gordon Morison.

The premise is simple enough — help revitalize a cryonically-suspended woman by raising her body temperature back to 37 degrees Centigrade (normal human body temperature, a.k.a. 98.6 degrees Fahrenheit). Roll over the switches on the playfield to raise the heat, and spell A-B-C-D to increase the saucer bonus. Knock down the four drop targets to activate Double Advance, then nudge the ball through the bagatelle lanes to speed up the process. Keep raising the backglass thermometer all the way to the top, then shoot the saucer and collect the Special.

As a game, Centigrade 37 is ranked high among Gottlieb's best, a moderately-difficult game with clear objectives from the waning era of electro-mechanical pinballs. As a piece of art, Centigrade 37 is a stunning beauty, with Morison's intricate illustrations invoking sci-fi works from the likes of Jack Kirby and EC Comics. Many players consider it a Cult Classic, and games for sale frequently fetch disproportionately high prices as a result.

A digital version of this table is available on The Pinball Arcade.