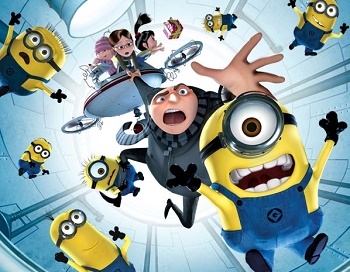 "So, what are you waiting for? You too can join Gru. The time is now! Heed the call! Become a Minion!"
— Gru
Advertisement:

Despicable Me: Minion Mayhem is an animated simulator ride that is located at the Universal Studios parks in Orlando, Hollywood, Japan and Beijing.

Based on the Despicable Me film series, the attraction features Gru (Steve Carell) seeking to create more of his Minions by outright enlisting everyday folk that he can transform into Minions, via a new device created by him and Dr. Nefario (non-speaking rolenote Voiced by Russell Brand in the first two films.), known as the "Minionizer." At the same time, he is also working on his ultimate present to Margo, Edith and Agnes (Miranda Cosgrove, Dana Gaier and Elsie Fisher respectively) in honor of their first anniversary together as a family. This leads to him quickly rushing the guests through the Minionization process, and ultimately letting the girls be in charge of training the new Minions.

In the attraction, the guests are lead through two pre-shows, one being inside Gru's house and the other being inside a prep lab. Once on-board the ride, the guests are "turned" into Minions and led into training course where many obstacles lie. While coaching the Minions, the girls also are trying to deliver their own anniversary present to Gru, which winds up causing more trouble than imagined.

Development of the attraction began swiftly after the success of the first film in 2010, and a mere two years later opened in the Orlando park on July 2, 2012; in place of the Jimmy Neutron's Nicktoon Blast ride. The popularity of the attraction would then kick start the development of a duplicate for the Hollywood park, which opened on April 12, 2014; replacing the Terminator 2 3-D: Battle Across Time show. Along with the ride itself, Hollywood also received an adjacent sub-area that's themed around Super Silly Fun Land; featuring a small spinner ride, a water playground, and several midway games.

A third version of the attraction opened at Universal Studios Japan on April 21, 2017, replacing Back to the Future: The Ride. This iteration of the ride has some minor differences from the first two, most notably featuring an extra safety video on how to board the ride vehicles, and an intro animation not seen in the other two iterations due to what the ride replaced in Japan. Japan's take on the ride also includes a surrounding "Minion Park" area that contains a candy store, midway games, and numerous photo-ops.

A fourth version exists at Universal Studios Beijing, opening with the park on September 20th, 2021. Much like its Japan counterpart, it uses the larger-capacity ride system and contains a surrounding "Minion Park" area.

A fifth iteration of the ride, along with another Minion Park, has been announced for Universal Studios Singapore. It is expected to replace the Madagascar area sometime in The New '20s. (It was originally going to open in 2021, but was delayed due to the COVID-19 Pandemic)

The Orlando and Hollywood versions of the ride were originally presented in 3-D, but, for reasons unknown, this aspect of the ride was done away with in 2019.

Tropes shown in Despicable Me: Minion Mayhem include:

Gru: Send in the next batch!