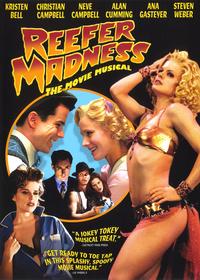 Creeping like a communist
It's knocking at our doors
Turning all our children
Into hooligans and whores!
—The Narrator, "Reefer Madness"
Advertisement:

In 1998, writing partners Dan Studney and Kevin Murphy (no, not that one) took a road trip from Oakland to Los Angeles and came up with the idea for a musical adaptation of the 1936 propaganda film Reefer Madness (aka Tell Your Children!). By the time they arrived in LA, they had written the first song.

The stage production and film use the original's framework, opening with a group of concerned parents congregating for a film presentation, proffered by a man who just oozes ulterior motive. The movie he shows tells the story of Jimmy Harper and Mary Lane, two upstanding, innocent teenagers, whose lives devolve into a twisted spiral of sex, violence and snack food, courtesy of the evils of marihuana. All the while, the original audience reacts with revulsion, shock and the occasional incredulity.