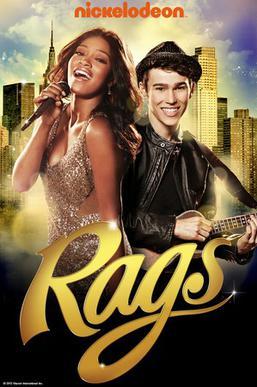 Rags is a Nickelodeon Original Movie produced in the year 2012.

Charlie lives with his cruel stepfather and his two stepbrothers, where they own and operate his deceased mother's restaurant. Charlie dreams of being a musician, but is forced to clean and work as his stepbrothers practice their own musical act. One day, he gets a job as a janitor at a record company's building, where he starts to become friends with the popstar Kadee Worth, who herself is dreaming of breaking from the mold and being herself. Charlie finally has a chance to accomplish his goals, but his stepfather has other ideas...