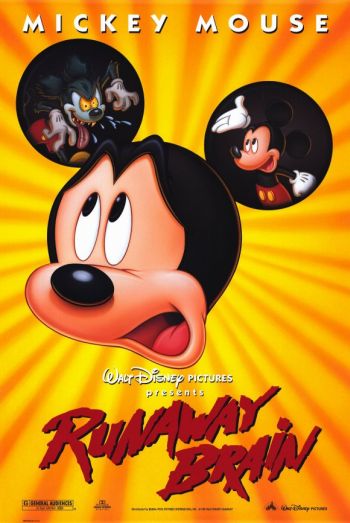 A 1995 installment of the Classic Disney Shorts, this Mickey Mouse short was first shown before A Kid in King Arthur's Court in theaters in the United States, while international theaters ran it right before A Goofy Movie. It was nominated for an Academy Award and shown in theaters again in 1997, this time accompanying Disney's Live-Action Adaptation of George of the Jungle, and then popped up during a marathon of Mickey Mouse shorts on the pre-Network Decay Disney Channel in 1999. It... probably won't be run on the Channel again.

The plot kicks off when Minnie gets upset with Mickey when he forgets the anniversary of their first date. Mickey tries to make it up to her by offering to take her miniature golfing, but she mistakenly believes he's taking her to Hawaii. To raise the $999.99 needed for that vacation, Mickey goes to apply for a job working for a mad scientist named Dr. Frankenollie. But he soon finds out that the job Frankenollie has planned for him was to switch the Mouse's brain with that of his giant monster, Julius (who resembles a cross between Pete and Frankenstein's Monster). The result is Mickey's mind gets trapped in Julius's body, and Mickey's body turning into the creature you see here. To make matters worse, Frankenollie is killed during the experiment, and Julius-in-Mickey's-body goes after Minnie. Thus, Mickey-in-Julius's-body must chase the monster down and rescue his girlfriend again.

This short is a cult favorite among Disney fans (notably including Warren Spector, the head developer for Epic Mickey) and was nominated for the Academy Award for Best Animated Short Film of 1995, but with the sheer amount of Nightmare Fuel generated from this, the Disney Company largely prefers not to talk about it. They only mention it in history books about the company's animated films, and the only physical video releases it has ever been given were a Japan-only laserdisc and a U.K.-only videotape, both in 1996, and on the Walt Disney Treasures DVD set Mickey Mouse in Living Color Vol. 2.

Perhaps because Disney has loosened up slightly when it comes to Mickey's characterization, the company eventually started acknowledging it again through merchandise, particularly its Vinylmation line, as well as Julius's Bonus Boss appearance in Kingdom Hearts 3D: Dream Drop Distance. Movies Anywhere posted it online in August 2015, as an exclusive addition to a compilation of shorts from the 2000s and 2010s.