Literature / The Sorrows of Young Werther 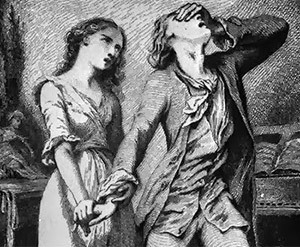 "Werther had a love for Charlotte
Such as words could never utter;
Would you know how first he met her?
She was cutting bread and butter...

Charlotte, having seen his body
Borne before her on a shutter,
Like a well-conducted person
Went on cutting bread and butter."
— William Makepeace Thackeray, Sorrows of Werther
Advertisement:

The Sorrows of Young Werther (Die Leiden des jungen Werthers) is a 1774 novel (revised in 1787) by Johann Wolfgang von Goethe about an emotional young man named Werther who falls madly in love with an young woman named Lotte, who is engaged to someone else. Werther gradually becomes more emotional and less mentally stable...

The novel was young Goethe's way of working out his feelings over his platonic relationship with Charlotte Buff (1753-1828), who went on to marry Johann Christian Kestner, who was on good terms with Goethe and served as the model for Albert in the novel. After Kestner's death Charlotte once visited Goethe in Weimar in 1816, an event that was freely adapted into the novel Lotte in Weimar (1939) by Thomas Mann.

The Sorrows of Young Werther was an immediate best-seller and made Goethe famous virtually overnight. The novel was one of the earliest works of literature to generate a recognizable fandom, creating a dress fashion. It was also one of the first to be blamed, not without cause, to have a negative effect on some of its readers; psychologists therefore continue to debate about the "Werther effect", meaning a work of art encouraging consumers to commit suicide. The "wave of suicides" following the novel was somewhat exaggerated, more recent studies indicate that there may only be about a dozen verifiable cases where the novel played a part. However, one of them was a friend of Goethe's, which probably was the reason why he published the revised edition of 1787. It also was one of the reasons why the novel was condemned not just by the usual moral guardians affiliated with traditional religion, but also by proponents of the Enlightenment. For instance the scientist and aphorist Georg Christoph Lichtenberg acidly quipped: "The best part in Werther is when he shoots the coward."

The success soon extended beyond Germany, it was first published in French in 1776 and in English in 1779. At his meeting with Goethe, Emperor Napoleon mentioned that he had read the book seven times. Werther was later adapted into a popular opera (written 1887, first performed 1892) by the French composer Jules Massenet. The East German writer Ulrich Plenzdorf transferred the action into the contemporary GDR in the successful play Die neuen Leiden des jungen W. ("The New Sorrows of Young W.", 1972).

Note that some of these tropes seem like they should be in YMMV, but even Goethe straight-out said that most of them applied; he was horrified, for example, that people were killing themselves in imitation of Werther.