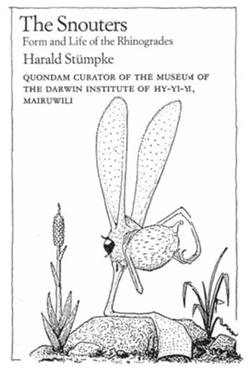 A speculative mockumentary book first published in German under the title Bau Und Leben der Rhinogradentia in 1957 and written by German zoologist Gerolf Steiner (under the pseudonym of Harald Stümpke). It documents a (fictional) order of strange mammals (mostly) native to the Hy-yi-yi Islands known as the Rhinogrades, or Snouters. Among other things, the most unique trait of the Rhinogrades is the nasarium, an organ derived from the nose that has evolved to fill every conceivable purpose imaginable.

You heard correct; they use their noses for everything. Including eating, singing, walking, jumping, grabbing, camouflage, burrowing, and swimming... among other things. As ridiculous as it sounds, the author documents them like real animals, right down to the last details.

Can be read in full here

The Snouters: Form and Life of the Rhinogrades provides examples of: