Literature / Songs of Innocence and of Experience 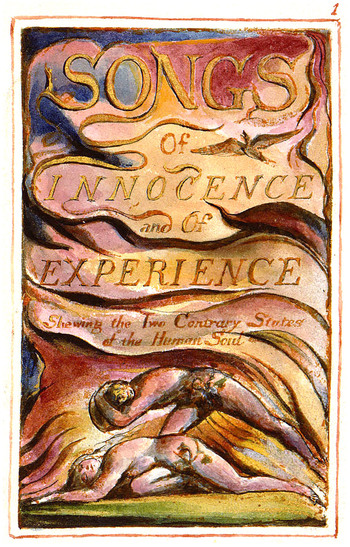 Songs of Innocence and of Experience, or to give the full title, Songs of Innocence and of Experience: Shewing the Two Contrary States of the Human Soul, is a book by the English artist and Romantic poet William Blake. It consists of two collections of poems, originally published in separate volumes. Notably, no two printings are alike, because Blake was his own engraver and printer and he hand-coloured each copy. Inexpensive facsimile editions are readily available, and are by far the best way to encounter the book.

The first of the two, Songs of Innocence, is a cheerful and optimistic volume which concerns itself with such themes as springtime, children's games, the freedom of the human spirit, and a kind and loving God. By contrast, Songs of Experience is considerably bleaker and more cynical, concerning itself with human frailty and cruelty, and containing harsh criticisms of the repressive and authoritarian culture of its day.