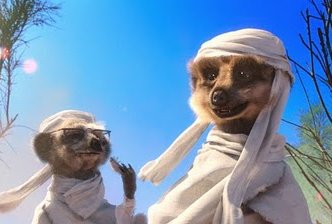 We didn't put up this image just so you could get cheap car insurance!
Advertisement:

Compare The Meerkat.Com is a series of adverts and a website designed as nothing more than Viral Marketing for an insurance website (comparethemarket.com). The adverts all take a similar format, Aleksandr Orlov the Meerkat will remind viewers that his website is for comparing meerkats, and not for comparing markets and urge viewers to check they have the correct URL. Then deliver his catchphrase — "Simples."