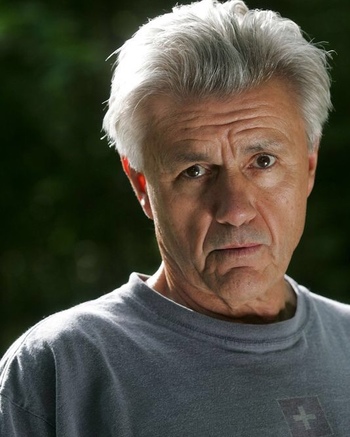 "Writing a novel is actually searching for victims. As I write I keep looking for casualties. The stories uncover the casualties."
Advertisement:

John Irving (born March 2, 1942) is an American novelist and screenwriter. He is the author of over a dozen novels and the screenplay for The Cider House Rules. Known for his very idiosyncratic method of working: he always writes the ending of a novel first, and structures the rest of the story towards that ending.

In addition to The Cider House Rules, and adaptations of The World According to Garp and The Hotel New Hampshire, his novels have also served as inspiration for the films The Door in the Floor and Simon Birch.

Works by John Irving with their own pages include:

Other works by John Irving contain examples of: