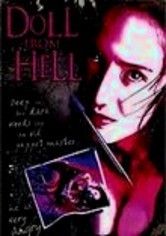 Doll from Hell is a 1996 Japanese Direct to Video horror film.

A group of delinquents believe the daughter of a dollmaker has witnessed one of their crimes. They attack her and her father, killing the former. The dollmaker happens to know a spell to transplant a soul into a doll, and sacrifices his life force to bring his daughter back. Having returned from the void, the girl teams up with her sister to seek revenge on her killers.

Not to be confused with Black Devil Doll from Hell.