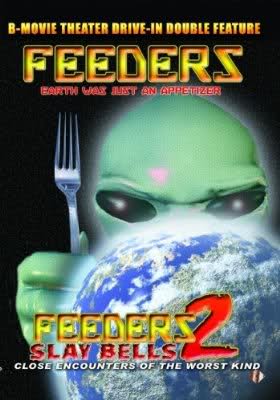 Actual Size May Vary.
"Earth was only an appetizer."
Advertisement:

Feeders is a low budget direct-to-video sci-fi horror film made by Mark and John Polonia in 1996.

Reportedly produced on a budget of five hundred dollars and shot with a consumer camcorder, Feeders follows buddies Derek and Bennett as their road trip gets sidelined by an invasion of people-eating aliens. It was followed by a Christmas-themed horror-comedy sequel.

Tropes used by Feeders include: